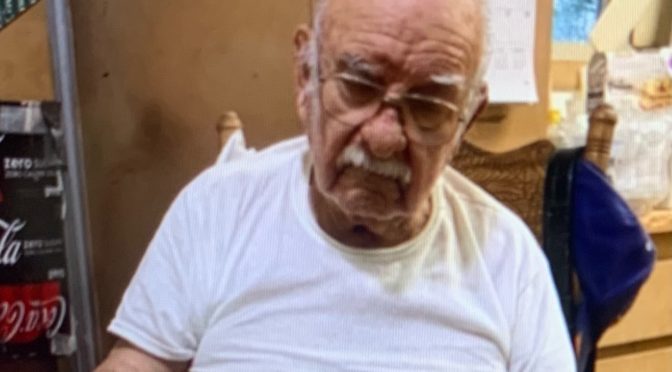 UPDATE: Guzman has been located and returned home.

The San Bernardino County Sheriff’s Department is asking for the public’s help in locating a critical missing person. Joel Guzman is described as a 92-year-old Hispanic male adult, 5’5”, 180 lbs., wearing a brown shirt and brown pants. Guzman is oxygen dependent and partially blind/deaf.

At tonight’s (November 23) regularly scheduled meeting, the planning commission will hold the town’s first public hearing on the issue of short-term vacation rentals since the Town Council enacted a moratorium on new permit applications on November 2. The commission is specifically considering amending code related to procedures for addressing problematic rentals and operators. The commission will also hold public hearings on efforts to redefine the town’s classification of housing, campgrounds, and hotels. Finally, the commission will consider the trimming of three Western Joshua Trees on the 7600 block of Ventura Ave, and the removal of four California Junipers and five Mojave Yuccas in the 57000 block of Terbush Ave. The meeting will be held at 6 p.m. tomorrow night at the Yucca Valley Community Center and can be attended online via a link below.

There are several ways to enjoy holiday traditions with friends and family, but it is still important to reduce your risk of COVID-19 while celebrating. Reporter Ernest Figueroa has these tips to stay safe this Thanksgiving…

Get vaccinated! Vaccines are the best way to end the pandemic and they prevent COVID-19 illness, hospitalization, and death. They’re safe and free and can be scheduled at sbcovid19.com. If you are sick, stay home! Even mild symptoms can spell bad news. To be extra safe, get tested for COVID-19 before and after Thanksgiving and wear masks or host gatherings outdoors if one of your guests is unvaccinated. It is also a healthy idea to open doors and windows inside to keep air flowing through.

For more information on having a COVID-19 safe holiday, visit sbcovid19.com. 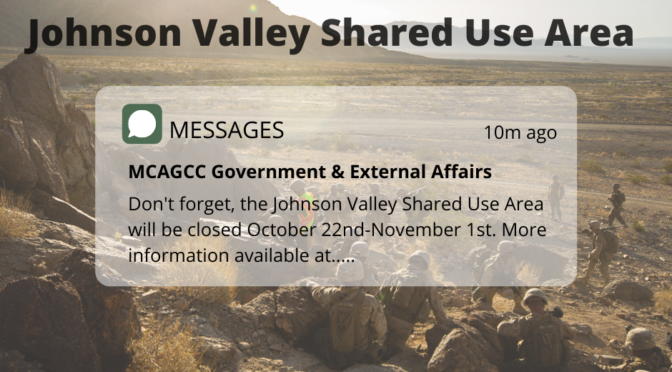 The Marine Corps has introduced a new “text alert” program that will send occasional text message alerts regarding the Johnson Valley Shared Use Area, closure dates, and other relevant information.

For more information, including terms and conditions visit: http://www.29palms.marines.mil/johnsonvalley/.

On Friday (November 19), the Department of Defense announced annual cost of living adjustments that will benefit military retirees and survivors during calendar year 2022.  With the details, here’s Gary Daigneault…

Most military retirees will receive a 5.9 percent increase to their retired pay beginning with the pay they receive on January 1, 2022, which is the largest such increase since 1982.  Likewise, survivors of members who died on active or inactive duty, or survivors of military retirees who participated in the Survivor Benefit Plan will, in most cases, see a 5.9 percent increase to their annuities beginning in January.

Survivors who are eligible for the Special Survivor Indemnity Allowance (SSIA) will also receive an increase to their SSIA payments that reflects this 5.9 percent adjustment.  The maximum amount of SSIA payable will be $346 beginning in January, although some survivors may receive less in SSIA as the Department of Defense continues to implement the phased reduction in the Survivor Benefit Plan – Dependency and Indemnity Compensation offset, as enacted by the National Defense Authorization Act for Fiscal Year 2020.

These cost of living adjustments are calculated based on the Consumer Price Index for Urban Wage Earners and Clerical Workers for the four quarters ending with the third calendar quarter of 2021 (July, August, and September 2021), and generally go into effect for all pay received beginning in January 2022.