With the upcoming Thanksgiving holiday, there will be special hours at the Twentynine Palms Senior Center and all Reach Out Morongo Basin offices.

The Senior Center and all offices will resume normal hours and operations on Monday, November 29. For more information contact Reach Out Morongo Basin at 760-361-1410.

Theatre 29 continues its 2021-22 season with an Agatha Christie murder mystery in January, and auditions are tomorrow! Arts & Entertainment Reporter Charlie Thomas tells you how you can get on the train…

Theatre 29 will hold open auditions for a new adaptation of Agatha Christie’s Murder on the Orient Express on Monday, November 22nd at 6:00 p.m. on the Theatre 29 Main Stage (73637 Sullivan Road, Twentynine Palms). Multi-award-winning Director Kathryn Ferguson is looking for a cast of 5 men and 5 women over the age of 18, preferably.

From the mistress of the murder mystery, Agatha Christie, comes a new adaptation by multi-award-winning playwright Ken Ludwig (Noises Off, Lend Me A Tenor). It’s 1934. Snow is falling. And the Orient Express is filled to capacity. What starts as a luxurious journey through Europe becomes the scene of a murder in the blink of an eye. Just after midnight, the famous train is stopped in its tracks by a snowdrift. When the isolated passengers discover a man stabbed to death in his room, they quickly become suspects as the one and only detective Hercule Poirot strives to identify the killer before the murderer strikes again. This clever and quick-witted adaptation will keep you asking, “Whodunit?”

All roles are open. A complete breakdown of the characters can be found on the Theatre 29 website at theatre29.org/auditions. If you are unable to attend the auditions on November 29th but would still like to be considered for the show, contact the director. COVID-19 VACCINATION IS REQUIRED. For more information, contact Director Kathryn Ferguson by e-mail at theatre29programs@msn.com.

Agatha Christie’s Murder on the Orient Express will run weekends at Theatre 29 from January 14th through 30th with performances Friday and Saturday evenings at 7:00 p.m. and Sunday matinees at 2:30 p.m.

Tomorrow (November 22), Joshua Tree National Park managers will close a section of Odell Road north of Queen Valley Road for visitor and staff safety. This temporary closure will allow the park to continue to repair damage to vegetation and soils caused by unauthorized pull-outs along this road.

The closure will begin at 7 a.m. and go through 5 p.m. Authorized pull-outs are located every half-mile along the road and are not part of this project. Access to Queen Valley and Big Horn Pass roads will be unaffected.

More information on Joshua Tree National Park can be found at: www.nps.gov/jotr/planyourvisit.htm. 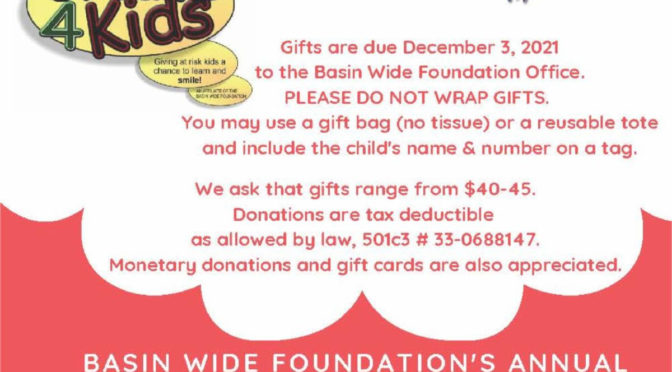 The “Dreams 4 Kids” campaign is providing more than 200 children in child protective services with gifts this holiday season. Spearheaded by the Basin Wide Foundation, the annual campaign asks kind-hearted people to donate gifts to local children who are in foster care or temporary homes. Gifts should be in the $40-$45 price range and should not be wrapped. Gifts can be dropped off at the Basin Wide Foundation’s office in Yucca Valley or at Hi-Desert Publishing and must be received by December 3. To sign up to be an “Adopted Santa” of holiday gifts, contact Kathy at 760-369-7219 or email basinwideinfo@gmail.com.