Two Landers men were arrested early Thursday morning (July 1) accused of residential robbery after breaking into a Joshua tree home and assaulting the homeowner. According to Sheriff’s reports, Deputies responded to a report of a break-in at a home in the 61800 block of Verbena Road in Joshua Tree around 7:30 p.m. Wednesday (June 30). The victim told deputies that he was in his back yard when he heard a loud smashing sound coming from his home. The victim entered his home and discovered that two men; John Delaney, 28 of Landers and Darrell Mathis, 43 of Landers; had broken into his home and were quickly approaching him. The victim backed away into his back yard out of fear as Mathis told the victim he would kill him for something he had done.

The search continues for a Morongo Valley woman who went missing Monday (June 28). Lauren Cho, 30, was last seen on foot around 3 p.m. in the area of Hoopa road and Benmar Trail in Morongo Valley. She was wearing a yellow tee shirt and jean shorts. A family member told Z107.7 that Lauren has a number of visible tattoos including a white mask on her upper right arm and lamb on her left shoulder. Anyone with information on the whereabouts of Lauren Cho is urged to contact Sheriff’s dispatch immediately at (760)956-5001 or Detective Ables at (760) 366-4175. Reference DR 092101115.

A Yucca Valley man was arrested early Thursday morning (July 1) accused of possession of heroin for sales. According to Sheriff’s reports, Deputies contacted Philip Kensinger, 37, at the intersection of Mariposa Trail and Onaga Trail in Yucca Valley around 11:15 p.m. During a search of Kessinger, Deputies found several grams of suspected heroin and several hundred dollars in cash. Kessinger was arrested for investigation of possession of heroin for sale. He was booked into the Morongo Basin Jail with his bail set at $100,000 and was later released.

Many are looking forward to a three-day weekend this year for Independence Day. Even though people are eager to travel and get together with family and friends, the California Highway Patrol (CHP) is urging motorists to slow down and enjoy the holiday. During the 2020 Independence Day enforcement period, at least 36 people were killed in crashes on California roadways. The CHP also made 738 arrests for DUI of alcohol and/or drugs. Cassidy Taylor has the details on this weekend’s maximum enforcement period…

Beginning at 6:01 p.m. on Friday, July 2, through 11:59 p.m. on Monday, July 5, the CHP will observe a Maximum Enforcement Period (MEP) focused on speed enforcement. To keep the roadways safe for everyone, all available officers will be watching for motorists who are distracted, speeding, or driving under the influence (DUI). CHP officers will also be on alert for aggressive driving and acts of road rage. With many motorists expected on the roadways, patience will be key. Allow yourself plenty of time to get to your destination and avoid unsafe driving behavior such as tailgating. Remaining calm and courteous behind the wheel reduces your risk of an unpleasant encounter with other motorists. If you feel you are at risk, call 9-1-1.

A Twentynine Palms woman was arrested Monday (June 28) accused of DUI. According to Sheriff’s reports, Deputies conducted a traffic stop on a vehicle near the intersection of Hatch Road and Alpine Avenue in Twentynine Palms around 4:45 a.m. for a broken license plate light. During their investigation, Deputies determined the driver, Bronte (Bront-Ay) Granell, 29, had an active Sheriff’s warrant. Bronte (Bront-Ay) Granell was arrested for investigation of DUI, driving on a suspended license from a previous DUI, and on an active $100,000 warrant for being under the influence of a controlled substance. She was booked into the Morongo Basin Jail and later released. 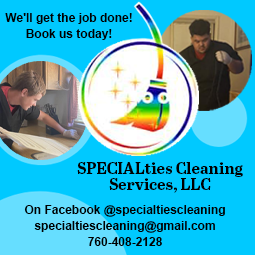